There’s been a lot of talk on social media this week about mental health and suicide thanks to Zoe Ball’s Sport Relief challenge in memory of her partner Billy Yates. Hardest Road Home was difficult to watch but also incredibly inspiring and the money donated will go a huge way to supporting those at risk of suicide. Good job Zoe.

One of the things mentioned in the programme was the ripple effect of suicide and the impact it has on so many people. In the days, weeks and months after Joe died, this effect was palpable. Family, friends and strangers all impacted by the loss of our brilliant boy, visited, called, wrote and texted; we had a house full of people sharing stories, grieving, supporting… And now, nine months on when the visitors have gone and life ploughs on, the impact on those closest to Joe continues. 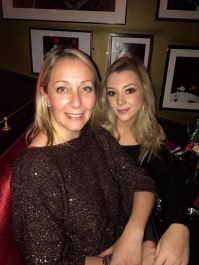 Grief can often lead to depression and it breaks my heart that this cruel, shitty, bastard of an illness has now taken hold of Claudia. My sweet, bright, hilarious, and determined girl is struggling and I desperately want to take the pain away. I couldn’t help Joe because he kept his illness to himself, although in his last week of life when we did know something was wrong, we didn’t take it seriously enough. The regret of not driving to Exeter, forcing him into the car and bringing him home, haunts me every day.

But I can do something to help Claudia. I understand depression much better now. I understand what it can do and that it can lead to feelings of such darkness and despair that death seems like the only answer.

The dynamic of Claudia’s life has shifted. She misses Joe so much and sometimes can’t see the point of a life without him in it. She was the middle child and had two brothers; now she’s the youngest and has lost her partner in crime, despite still being close to Connor. Their shared history, their childhood, school, university, their whole lives are intertwined. The stories that only Joe and Claudia knew, the memories only they shared, the love that only they had for each other has gone, and she’s really struggling to make sense of it.

The two of them fought like cat and dog when they were younger but in the past few years, since they’d both moved away to university, they’d become incredibly close. Joe was often the first person Claudia would turn to when she needed to talk. He was always her baby brother and the smart arse who knew the answer to everything, but their relationship was maturing, and it was lovely to see.

The stories they used to tell were hilarious: Joe standing in the ladies’ toilet of a bar with a drunk Claudia who needed to go home, telling all the girls – “Back off bitches, this is my sister” with a phone in each hand trying to get hold of David on one of them and me on the other; the two of them owning the dancefloor at a club; the hours spent at Top Golf; the car journeys; the Facetime chats…

And so, our girl is back home. Maybe for good and maybe just until she gets better and can finish her degree. She’s done all the right things – she’s gone to her GP, she’s talked about how she’s feeling and she’s been referred to the mental health crisis team in Nottingham. She has given her consent for them to talk to me and David about the things she finds difficult to say, and we’re in contact with them until we can get her moved to the outpatient care of our local mental health trust.

It’s hard, it’s shit and I’m scared. But she’s talking to us, to her friends – who are amazing – to her GP and to the mental health team. And talking about it has meant the difference between struggling in silence and having us put our arms around her, bring her home, listen and try to help. She’s worried because coming home and taking a break from uni wasn’t in her plan. I’ve told her we just need a new plan.

Everything changed on that day in June when Joe decided that enough was enough, and Claudia’s plan now needs to be focused on getting better and not thinking too far ahead. My plan, David’s plan, our plan for this family changes every day so we’ve learned not to think about next month, the next six months, the next year… We just think about today, tomorrow, the manageable, the achievable, the here and now.

Amidst all the anxiety, the stress and the worry of the past couple of weeks, our family’s dark humour continues to shine through. Claudia found it hilarious that, while waiting for an appointment at the mental health hospital, this was the song they had blaring across the waiting room…

If you would like to support me and donate to this very important charity in memory of Joel, please visit my JustGiving page.

Suicide is the leading cause of young deaths in the UK. PAPYRUS is a national charity that believes many young suicides can be prevented.